Waterford FC is delighted to announce the additions of Jake Evans and Tom Smith on loan from English League One club Swindon Town until June. Both Evans and Smith have impressed on trial for the club in recent weeks.

After playing a number of pre-season games both in the centre of the park and more recently at right-back, Jake Evans offers the club versatility ahead of the SSE Airtricity League First Division campaign kicking off this Friday night away to Athlone Town. The 18-year-old spent a total of ten seasons with the Swindon Town Academy before signing a professional contract with the club in April 2016. Evans has featured for the Swindon Town first team this season, making one appearance in the League and two EFL Trophy games against Exeter City and Luton Town. 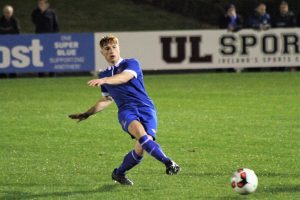 Exciting youngster Tom Smith is another to come through the Swindon Town Academy and is predominately a central midfield player. Smith made his first appearance for the Blues last Friday night in our final pre-season friendly away to Limerick and will look to build on the 12 senior appearances for Swindon this season where he has already clocked up a total of 696 minutes.

Both players bring the squad size to twenty two in total with one more addition on Transfer Deadline Day expected to be confirmed before the window shuts at 11pm this evening.