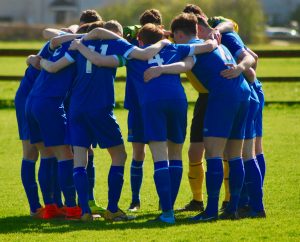 Waterford FC Under-19s started their 2017 Southern Elite Division campaign with a richly-deserved point after a 1-1 draw away to Galway United on Saturday afternoon.

The game was played in sunny conditions at East United’s grounds outside Galway, and Sean Roche and Owen Wall both had early chances but couldn’t get the Blues on the scoresheet. At the other end, Blues keeper Paul Martin saved well from Galway United’s Cathal Carney’s strike for the home side.

Owen Wall forced United keeper James Tierney into a smart save, before he headed just wide minutes later from Roche’s deflected cross. Roche had a chance of his own from a header but it was well deflected wide.

Galway took a 1-0 lead at the break after good work from Evan Coyne saw him fire past Martin for the opening goal.

The Blues began the second period with purpose and the introduction of Glenn Waters began to help the Blues dictate play through the middle. Owen Wall’s pace caused problems for United’s Evan Murphy as the tricky attacker twice got the better of him down the Blues right as David Breen’s side looked for an equaliser.

With 12 minutes remaining, Shane Griffin went close. Eddie Black did well down the right sideline before crossing; but Griffin’s strike was just wide of the target as the pressure built.

Against the run of play, Galway United almost made it 2-0. First, Declan Sharkey played in Adam Gilbert but Blues keeper Paul Martin pulled off a great save, before Sharkey struck the Blues crossbar a minute later.

But the equaliser that the Blues deserved did arrive five minutes from time. Shane Griffin’s dangerous corner found the feet of Sean Roche inside a packed penalty area and he made no mistake to fire into the top corner of Tierney’s goal.

It was a well-deserved leveller for the Blues in a second half of great quality. David Breen’s side play host to UCD next Sunday at 2pm.